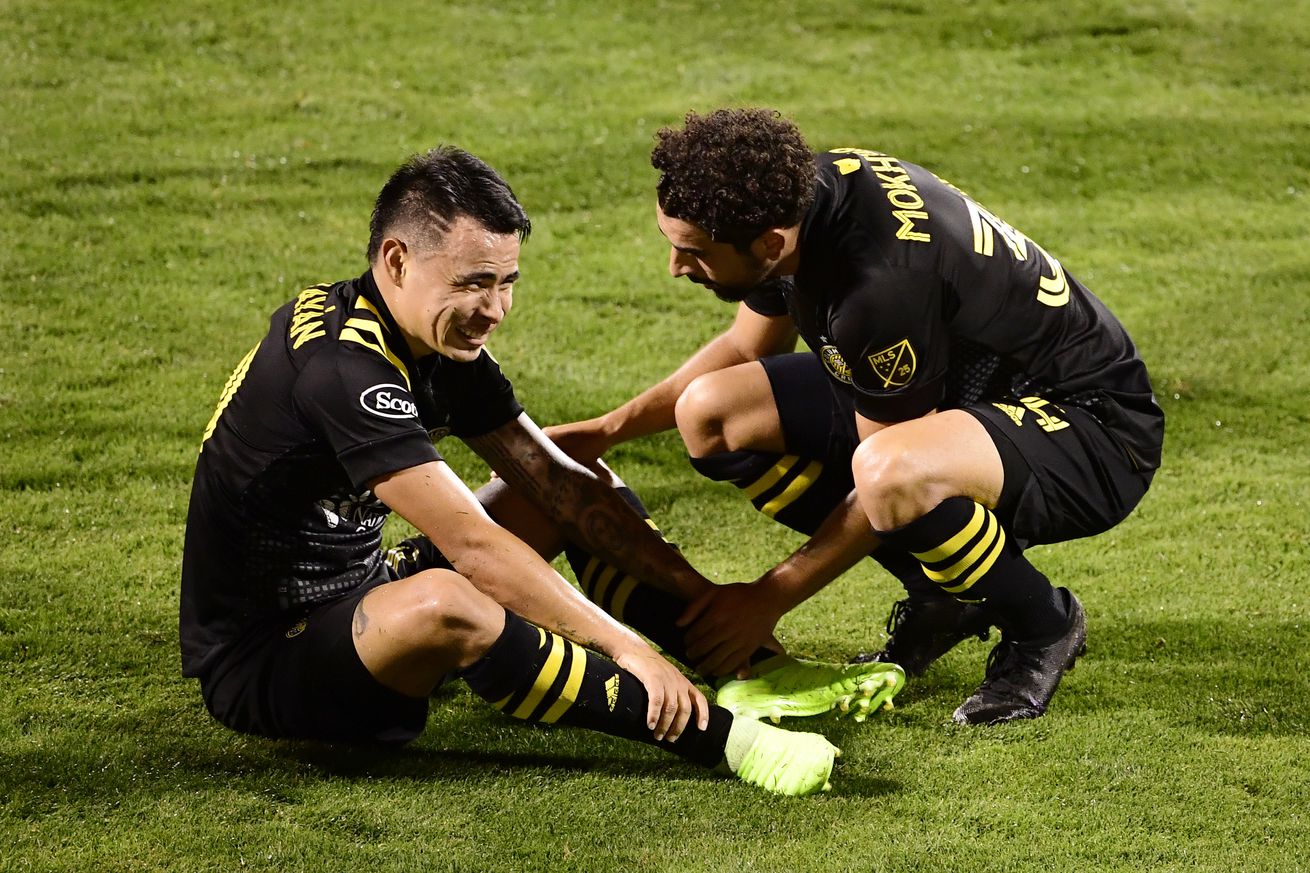 The Black & Gold don’t know if their two key midfielders will be back Saturday.

Columbus Crew SC wasn’t happy with the team’s first 20 minutes against the Chicago Fire last weekend, when the team conceded two goals in a game for the first time all season, but head coach Caleb Porter was pleased with the remainder of the match as the Black & Gold came from behind to earn a 2-2 draw. What made the comeback even more impressive was the Crew did it without two important players on the field in Lucas Zelarayan and Darlington Nagbe due to knee injuries.

After the game, Porter said both players were doing with knee injuries that had them in and out of practice in the week leading up to the game and he didn’t expect either to miss a lot of time. A week later and the questions about both players remain the same as Columbus prepares for Saturday night’s first-ever matchup against Nashville SC.

On Thursday in his weekly press conference, Porter gave as much of an update as he could on both Zelarayan and Nagbe.

“We’ve had a number of injuries where I don’t have clear answers in regards to where guys are at. This is another week where, again, we’re not sure where they’re at at this point,” the head coach said of his two midfielders. “They have been in training, but they’ve also been out for a couple of weeks. Different injuries.”

Zelarayan, the Black & Gold’s primary playmaker, has played in seven of the team’s 11 games this year, starting six. The No. 10 has four goals and two assists, both second-most on the team. Three of his finishes have been game-winning goals and one could argue Zelarayan should have more assists if teammates finished chances.

Putting it simply, the Crew is clearly better offensively when Zelarayan is on the pitch.

But that’s what makes the decision complicated. Similar to the ankle injury he dealt with during the MLS is Back Tournament, Porter and the Columbus staff want Zelarayan 100 percent healthy and have to decide when it best to put him back on the field.

“Lucas, as I mentioned was an MCL Grade 1, so a very minor MCL, which is usually a couple of weeks,” Porter said on Thursday. “He’s getting closer. So I think it will be tomorrow when we know for sure what his role will be. Will he start? Will he come off the bench? Or does he need another couple of days to factor in on Wednesday?”

Nagbe was yet to miss a game before last Saturday in Chicago and was one of the Crew’s most consistent player through the first 10 contests. His passing and possession in the center of the midfield is a major reason why the Black & Gold sit atop the Supporters’ Shield and Eastern Conference standings this year, despite just one goal and one assist on the stat sheet.

But with Nagbe, dealing with soreness after banging knees in the Aug. 2 win against the Philadelphia Union, the injury has been a bit trickier as the swelling and pain continue to flair up.

“It’s been sore, it’s been swollen and he’s training but not 100 percent,” Porter said of Nagbe. “So it’s one of those where we have to be smart, do the right thing. We want to win every game but also we have to keep an eye on the next game and the next game when we’ve got a very compacted window.”

Following Saturday’s game against Nashville, the Crew host Minnesota United on Wednesday before traveling to Connecticut to face Toronto FC. No disrespect to the East’s ninth place team in Nashville, but those will be the toughest two opponents Columbus has faced all season. As Porter stated, the Black & Gold want to win every game but not at the cost of players suffering further injuries.

“Tomorrow’s another day where I think we’ll make those decisions on those guys, where they will be at, what their role will be,” Porter said. “But the Darlington knee is a little bit less cut and dry because it’s more of a subjective, how the player feels and he’s been very sore, that knee.”